Order Now for a FREE Bonus Get Your FREE Bonuses

As a champion for nonprofit leaders hell bent on maximizing the impact of the nonprofit sector, Joan wrote this second edition Joan Garry’s Guide to Nonprofit Leadership during COVID lockdown. She knew that board and staff leaders would need a guide come January 2021 to navigate a world where old rules no longer apply and a world that needs them now more than ever.

A very different time demanded a very different book. Certainly not different in style, Joan’s new book is funny, inspiring and filled with practical advice. Her voice is accessible and you’ll feel you are getting a pep talk from your biggest fan.

Drawing on her own experiences as a nonprofit E.D., a board leader, a volunteer and a donor Joan shares her stories and introduces you to a host of new characters she has met since 2017. Board and staff leaders will see themselves in these folks – recognizing the mistakes and celebrating the successes.

In this new book, Joan will help you realize that “nonprofits are messy” – too many cooks, too few resources, and an abundance of passion and show you the way to find joy and privilege in that “mess.” In this newest book Joan will teach you how to:

“I wrote the book I wish I could have read with my board chair in my first ED job at a very messy nonprofit.”
– Joan Garry

“Joan brings a huge heart, a challenging spirit, and an incisive intellect to the challenges of the social sectors. In times of turbulence, chaos, and uncertainty — the very times in which we live — we need grounded, thoughtful guides to keep us disciplined, focused, and effective.”
Jim Collins

“There is no voice in the world of philanthropy today, I would rather listen to than Joan.”
Jenna Bush Hager

“Her many lessons for non-profit leaders are helpful any time; they are absolutely essential in the midst of crises. This book is a humorous, high-energy read, filled with great stories and profound insights. Highly recommended!”
Michael Watkins

Bestselling Author, The First 90 Days and Your Next Move

“You feel like you’re venting with a wise and caring friend at happy hour.”
Vu Le

“Joan Garry is the Dear Abby of the nonprofit sector, dispensing practical and brilliant advice to nonprofits with her trademark humor.”
Beth Kanter

Trainer and Author, The Happy Healthy Nonprofit: Strategies for Impact without Burnout

“Joan understands nonprofits the way a great mechanic understands cars, from years of getting her hands dirty under the hood.”
Rabbi Rick Jacobs

“I giggled, I pondered, I smiled, I nodded! Awesome! I share Joan’s belief that non-profits can change the world and she has given us the book that will make that happen!”
Caryl Stern

Joan Garry is an internationally recognized champion for the nonprofit sector and a highly sought after executive coach for CEOs at some of the nation’s largest organizations. Joan’s firm offers high-end strategic advisory services with a unique combination of coaching and management consulting. She is called upon by large organizations to tackle substantial change management, crisis management and leadership transitions requiring a hands-on strategist, a messaging expert, and a compassionate truth teller.

Through her blog, podcast and book, she has developed a reputation as the ‘Dear Abby’ of the nonprofit sector, advocating for the success of nonprofits, large and small. Her platforms reach hundreds of thousands of nonprofit leaders monthly from across the globe.

Joan is also the founder of the Nonprofit Leadership Lab, the online educational and community portal she leads for board and staff leaders of small nonprofits.

Joan Garry began her career in 1981 as part of the management team that launched MTV. She followed this successful eight-year tenure as an executive at Showtime Networks. Then, in 1997 while either having a midlife crisis or avoiding one, Joan left the corporate world and became the Executive Director of GLAAD, one of the largest LGBT rights organizations in the U.S.

Order the Book for a BONUS!

For a limited time, I’m offering a bonus for people who order my book. It’s my way of saying THANK YOU! The 14 Attributes of a Thriving Nonprofit

Let me know you ordered the book and I will send you a downloadable guide where I focus on what the best nonprofit organizations are doing right. My hope is this will inspire you and set an aspirational vision. Maybe your non-profit does a bunch of these really well (I hope so!), but we all have something to work on.

Bonus 1: The 14 Attributes of a Thriving Nonprofit

In this downloadable guide, I focus on what the best non-profit organizations are doing right. My hope is this will inspire you and set an aspirational vision. Maybe your non-profit does a bunch of these really well (I hope so!), but we all have something to work on.

Bonus 2: A Guide to Running a Great Board Meeting

In the “twin-engine jet” that is a thriving nonprofit, the board is a critical co-pilot. But nothing makes board members cringe and lose momentum more than board meetings that waste their time. In this bonus, I propose a framework for running effective meetings that bring goosebumps. You’ve got a poorly paid and overworked group (your staff) who rely on the efforts of people who get paid nothing (volunteers) and are overseen by another group of volunteers who get paid nothing and who are supposed to give and get lots of money (board.) All of this in the service of something that every single one of them cares passionately about. MESSY!

Attributes: The Superpowers of Nonprofit Leadership What Makes a Leader Great?

Great nonprofit leaders have certain skills, work on honing core attributes and develop not only a real understanding of the nature of nonprofit power but an appreciation for it as well.

Effective Communications: You've Got to Get Me at Hello 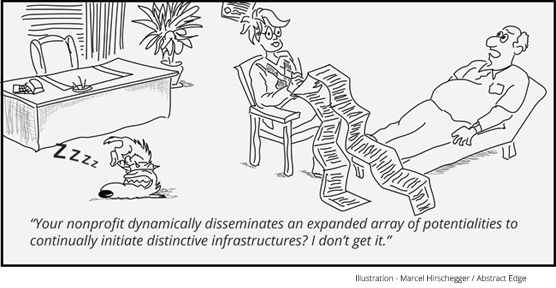 How to Attract Great People to Your Mission

Some organizations are easier to explain to folks than others. An organization that helps clients directly would seem to be the easiest; advocacy and lobbying often feel more complex and abstract. Schools can struggle to identify messages that clearly differentiate them from other choices parents have for their kids. But get this: even the easy ones don’t always get it right. When The Staff and Board Work Together

Sounds like a great model, doesn’t it? Board and staff working as thought partners who, together, drive the organization forward led by two individuals who understand their roles, each of whom are passionate about their jobs and determined to do right by the organization. This chapter shows you how to get there.

Yes, Virginia, you can have a high functioning board.

This chapter unearths everything we are doing wrong, how boards become disengaged (or worse), and explains how to get it right,

Strategic Planning: The Key Is Not in the Answers. It's in the Questions. President Dwight D. Eisenhower once said, “Plans are useless but planning is everything.” Maybe it’s time to throw the word “plan” overboard and begin to think about strategic planning differently. It’s time to stop engaging in processes that suck the life out of the people involved. Instead, let’s breathe life into the organization and its stakeholders.

Fundraising: You Can Do This Fundraising is about an invitation to join you in the remarkable work you do. It’s about building relationships that last. It’s also an art and a science, which means you will make mistakes, and a lot of people will say no. And that’s OK.

Managing People: The Paid and the Unpaid I Came to Change the World, Not Conduct Evaluations

There are some big differences between managing in the corporate world versus at a nonprofit. Nonprofit folks usually aren’t in it for the money. Some of them are even volunteers and make nothing at all. In this chapter, we discuss the attributes and motivations of 5-star staff and how to manage them so they never want to leave.

The Small and the Mighty

Two thirds of all nonprofits have budgets under $1 million and two thirds of those are under $500,000. But small nonprofits can (and do) have outsized impact. The land of the small and mighty is unique – not all the same rules apply. But making three big moves can make all the difference.

Crisis Management: When It Hits the Fan Crisis Management: Preparing For the Worst

Nonprofit leaders are by disposition an optimistic lot. They believe that with time, energy, smarts, strategy, and sheer will, they can improve society in ways large and small. So advocating that they take the time to think about the worst possible thing that could happen to their organization, sector, or to a client? Most don’t want to go there. But go there you must.

Succession Planning: Hello, I Must Be Going The only constant in life is change. But leadership transitions are the most destabilizing forces in the life of a nonprofit. And when it’s a five-star leader who says goodbye, it can rock an organization to its core. This kind of transition transfers power to a board that may or may not be prepared or capable of handling it. And then what about board leaders?